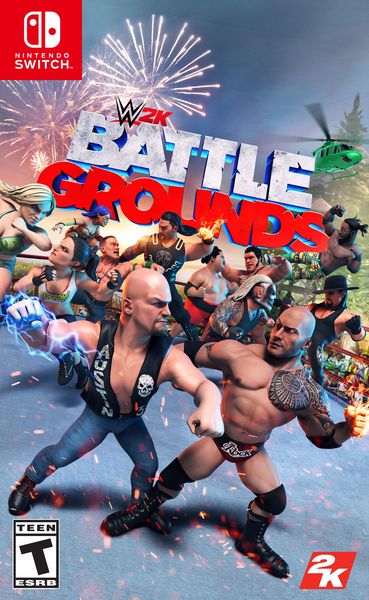 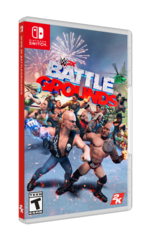 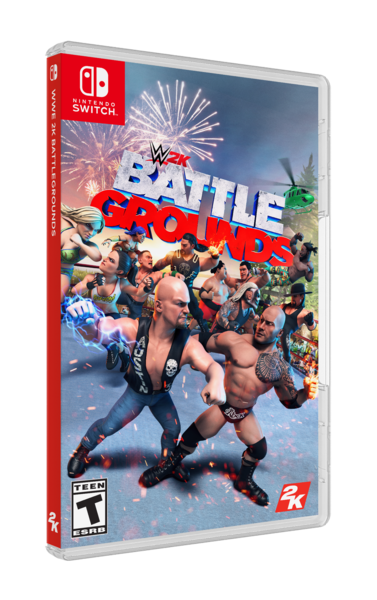 The world of WWE is your battleground with all-new, over the top, in-your-face, arcade action as your favorite WWE Superstars and Legends battle in outlandish interactive environments around the world. Battle it out with, or against your friends in your favorite local and online match types with an arsenal of exaggerated maneuvers, special abilities, and devastating power-ups. including Steel Cage, Royal Rumble, Fatal Four Way and more, while Mauro Ranallo and Jerry “The King” Lawler call all the multiplayer mayhem! Are you ready to enter the battleground?
Brawl Without Limits
Featuring over 70 WWE Superstars and Legends, take your favorites into battle with unrestrained, unhinged, and in-your-face pandemonium! Pull off over-the-top moves and use your special abilities to destroy your opponent while battling in interactive environments during multiplayer action!
Battle with Friends - Online or on the Couch
Compete in Online Tournaments or stake your claim as King of the Battleground and survive the online melee against players from around the world! Plus, brawl in local multiplayer and dominate your friends from your living room!
LOADS of Match Types
Wage war in a wide variety of your favorite match types with fun, new twists, including Steel Cage, Royal Rumble, Fatal Four Way and the all-new Battlegrounds Challenge!
It’s Your Battleground
Make WWE 2K Battlegrounds your own with tons of customizable parts as you create, customize, and edit your own original created characters and Battlegrounds!
Battle It Out Across the Globe
Play through an all-new story mode told through original comic strips, alongside Paul Heyman and Stone Cold Steve Austin and help lead the charge to find the next WWE Superstars! Battle as unique and colorful new characters against established WWE Superstars to test your mettle and show your skills while unlocking new characters and Battlegrounds along the way.

Battlegrounds
● 9 different arenas battlegrounds arena locations - some are inspired by well-known locations in the world like The Everglades or Mexico. Here is a list of the arena locations and accompanying interactive features. 1. Everglades – Alligator
2. Mexico – Goat
3. Bootcamp – Helicopter
4. Scotland – Bagpipes
5. Detroit – Oil Barrels and Car on lift
6. New York – Lava
7. WrestleMania – none
8. Raw – none

● The user can also create and customize their own Battleground arena with vanity items to personalize the space.
● Arenas have interactive elements, interactive weapons and are destructible

Currency
There are two types of currency in the game: Battleground Bucks (earned currency) and Golden Bucks (purchased currency).
- All game content can be purchased with earned Battleground Bucks (soft currency which is earned) such as WWE Superstars, vanity outfits, clothes, and custom arena items. To unlock content faster, Golden Bucks are available for purchase on the first party game stores.
- Purchase is optional and not required to unlock all available content

Gameplay Modes:
Campaign (SP)
A single-player mode where the user competes against real WWE Superstars. The story is told through comics as you add to your stable of superstars to beat the next challenge.
Play as one of the 7 newly created Superstars like Bolo Reynolds and Jessica Johnson.The story is divided in several regions; new regions are unlocked progressively when the user completes the previous ones. Each region features its own arena and playable superstar.
The user unlocks an assortment of game content (superstars, power ups, vanity items, etc.) while playing campaign matches and achieving campaign goals. Note: In the campaign mode you cannot play as WWE Superstars, just against them.

Exhibition Matches (SP & MP)
Play as and against WWE Superstars.
You can play Exhibition matches as men or as women, but women cannot play against men.
Exhibition matches can be played as a single player against the AI or up to 4 players local or online.
There are a wide variety of match types within Exhibition mode including 1v1, Tag Team, Triple Threat, Fatal Four Way, Steel Cage Match, Royal Rumble and more.
1v1 – regular match, performing a pin or submission on an opponent wins the match
Tag Team – 2v2 total, only 1v1 at any one time, opponents can tag in their partner in their place
Tag Team Tornado – 2v2 at the same time
Triple Threat – 3 opponents face off against each other
Fatal Four Way – 4 opponents face off against each other
Steel Cage - 1v1 and 2v2 options available – collect the money to climb out of the cage
Royal Rumble – survive by throwing 20 different opponents out of the arena. Opponents enter individually and have a set amount of time before the next one comes in
Gauntlet – face off against 4 different opponents, performing a pin or submission on each of them to win
King of the Battleground (MP - online only, up to 8 players)
- Online last man standing mode where up to 4 users compete in a free for all match where everyone is trying to eliminate their opponents and stay in the arena.
- The objective is to throw opponents out of the arena. The longer the user stays in the arena, the higher the score they earn.
- Four opponents are waiting on the sidelines and will enter the arena when an opponent has been thrown out. Players dynamically matchmake into a live game. This mode keeps on going until all opponents have been thrown out of the arena.

Tournaments (MP - online only)
Tournaments with different win conditions will be available at launch. These will be online time-restricted events featuring a multi-round tournament with a custom match and rule set. Each time the user wins a match, they get rewards.
Battleground Challenge (SP)
Create your own Superstar and begin your own career. You can customize however you want with items you unlock or can purchase in the store, including combat animations.

The user can create their own Superstar with a number of customization options including face, skin color, height, weight, clothing options and more. Change class style, body type, face, hair, eyes among other things.
Vanity items
Custom WWE Superstars can wear any vanity item. Real WWE Superstars only can wear specific outfits that they have worn in real life. Each Superstar has 2 alternative outfits/costumes which can be purchased. Except for Edge although this may change.
Arena Creator
The user can create their own Arena to play matches in. The user can customize the arena with custom turnbuckles, ropes, skirts, and more.

Gameplay Features:
All Superstars share common moves such as:
Running Hits, Aerial Techniques, Irish Whip, Pin, Submission, Counters / Reversals, Blocks, and Parry
In addition, each Superstar utilizes one of 5 class styles. Each class style has their own combat moves and throws.
Powerhouse: is the strongest Superstar and uses their strength to perform powerful moves. Technician: is a specialist in wrestling technique and unrivaled at using counters.
High-Flyer: is a specialist in aerial maneuvers, including jumping off the ropes and turnbuckles.
Brawler: focuses on striking moves.
All-Rounder: A mix of all styles.
Each Superstar also has their own unique moves, in addition to the shared moves and moves of their class listed above.
● Unique entrance and Licensed Entrance music from WWE
● Signature Finisher Moves: These are powerful moves that the WWE Superstars are known for. Each Superstar has up to 2 of these.
● Taunts: These actions are not attacks or defensive moves, they are performed in order to antagonize opponents.
● Each WWE Superstar will also have a few unique punches or kicks or throws.

Power-Ups
In addition, all Superstars have access to powerups. The player can choose which 3 powerups to bring into battle. They can be used during a match when the player has accumulated enough energy. Such as health regeneration or doing enough damage with one punch to break the arena.
Skill Trees
This is a system that allows the user to unlock different skills to improve performance and are composed of three branches: attack, defense, and charisma.
Battlegrounds
Battle your way through 8 Battleground Arenas. (see above for full list of arenas and interactive features)
Weapons
Superstars can use 5 different weapons; Moto, toy hammer, chair, guitar and kendo stick.
Interactive Objects
The arenas contain different interactive elements that superstars can use to their advantage. Each one of them has a different mechanic. These are objects that can be found outside of the arena but within the gameplay area of the battleground.
Crowd Bar
The crowd call out for certain combat moves during a match and if the player performs them, they will earn extra points to get their crowd meter up. This can help when performing a pin or submission on an opponent, because the crowd is behind the player more.
Daily Challenges
The daily challenge system feeds challenge’s to the user to encourage them to explore the game. Such as “Play more games!” and “Apply a vanity item to your created superstar”